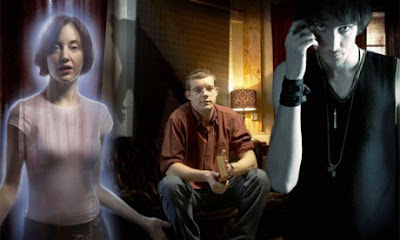 At some point I should blog about recently turning 41 and the way my birthday slipped past me like a ship in the night; or the superb season four finale of Doctor Who; perhaps the MIAF program, launched last night, which Alison has already blogged about in generous detail; or this year's MIFF program, which I've now finished digesting which means I can map out my film viewing for the next few weeks.

Instead, I'm going to alert those of you who don't already know about it to a fantastic new-ish (it aired in February) TV program from the UK that's sure to whet the appetites of anyone who's A) ever lived in a share household, B) wants to know what out gay actor Russell Tovey (Rudge in the film of The History Boys, and Midshipman Frame in Doctor Who: Voyage of the Damned) is up to, career-wise, and C) like myself enjoys sinking their teeth into genre shows with a supernatural bent.

In February, the show's pilot screened on BBC Three, to much acclaim and fanboy slavering. Then in April, a six-part series was commissioned, to be screened next year.

But what's it all about, I hear you ask? Let me quote from the media release:

Starring Russell Tovey, Andrea Riseborough and Guy Flanagan, the pilot of Being Human followed the lives of three flatmates – a werewolf, a vampire and a ghost – in a witty, sexy and extraordinary look at the friendship between three 20-something outsiders trying to find their way in an enticing, yet complicated world.

I've just finished watching the pilot episode, which has utterly captivated me. It's not without its faults, but overall it's extremely engaging. The characters are well drawn and extremely sympathetic, and the premise for the show's drama is strong and consistent. If you'd like to see what I'm talking about, I've posted the first part of the pilot episode below; you can find the rest of it on YouTube, here. Enjoy!

Posted by richardwatts at 2:43 pm

Not to mention Guy Flanagan is srsly hot.

Totally agree with the Guy Flanagan rating. And, huh, thanks Richard for making me watch an hour of tv on YouTube instead of doing the (rather pressing) tasks that are on my list. Any tv show that quotes William Blake gets high marks from me. And of course further proof for my thesis (weeeelll, it's not onyl my thesis) that genre is where you find the intelligence in popular culture.

Wow! Fantastic. Could've been doing homework last night but instead watched this and then spent the rest of the evening googling the actors. Thanks for the tip off Richard. Bless the BBC.

Alison, Anonymous - you're welcome; glad you got a kick out of the show as well.

Sarah - I agree with you on Guy Flanagan as well, though I also find Russell Tovey oddly attractive: I think it's the ears...

Please can you write a blog on the finale of Doctor Who? I'd love to hear your thoughts - so far the few people I know who've seen it have had very differing views!

I thought it was ace in all but two areas.

They're quite prominent aren't they. I thought him having a wash was a bit of a laugh. Vigorous, much? Very cute.

I saw this back in March and I think it really has promise. The suggestion of an overarching plot around the other vampires vs. their attempts at normalcy should work well. A long wait for the actual series though.

And yes, it’s all about the ears! I’m glad someone else can see it.

At the same time I had a look at the other BBC3 pilot, Phoo Action, but I think that had real problems. Unfortunately the mutants just didn’t translate very well from comicland. Maybe if they’d thrown some more money at it?

Anyway, shouldn’t you be out there consuming the latest Whedonism?

I want to bear his children.